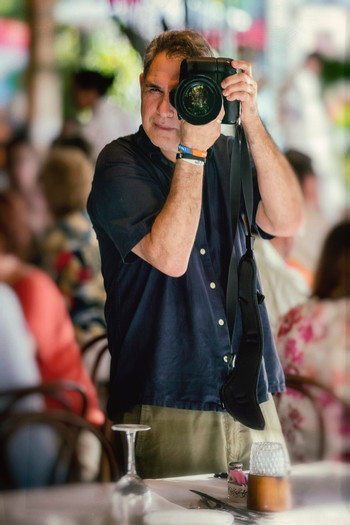 McLean photographer Dave Fimbres has been taking pictures most of his life, but became serious about photography only after his two sons were born in the early 2000's. Like many, he had a camera as a child and took pictures of the various places his family lived or visited. Unlike most children, though, he had the opportunity to visit many countries most kids never see. His father, a foreign service officer, moved the family to Spain, Chile and Venezuela, in addition to the Washington, D. C. metropolitan area.

Dave completed high school in Caracas, graduating from the International School there. He earned a Bachelor of Arts degree in sociology at George Mason University and went on to obtain an Associate's Degree in information technology at Northern Virginia Community College. Now retired from a career in software development, he is able to follow his passion for photography.

Dave comes by his artistic talent naturally. His mother majored in art in college and painted watercolors. When his own children were born, he wanted to record their childhood. At that time, he converted from film to digital photography. Today, his subject matter includes anything that attracts his interest, including landscapes, inanimate objects, flowers and people.

"My best work is candid photography. I enjoy capturing someone's personality and essence." He is inspired by photographer Robert Frank, who said: "When people look at my pictures, I want them to feel the way they do when they want to read a line of a poem twice."

Dave frequents the Maryland Renaissance Festival and fairy festivals where he takes pictures of anything he finds compelling. He especially likes face-painting pictures and is known for whimsical bubble shots. A musician himself–he plays blues and rock & roll on bass and guitar--he gets commissioned to photograph musicians and live bands. He says that his interest in music was eclipsed by photography, an avocation that obsesses him. "I pretty much live and breathe photography," he says.

Because of his heavy involvement in his sons' activities, he has become the official photographer for the swim and dive teams of Kent Gardens Recreation Club in McLean. Parents can commission him to do photo shoots of their children or capture action shots in the heat of an event. "I give away as much as I sell," he says. In a nod to Richard Linklater's movie, Boyhood, Dave has photographed the same kids over a number of years as they grew up.

Dave processes each photo to bring his own interpretation of the scene. "The human mind filters the scene, but the photo doesn't," he says. For instance, the photo might show a tree behind the model's head that the photographer didn't notice. Each photo requires ten to 30 minutes of editing to make the picture right. "I'm trying to bring a vision to this kind of work that captures the inner soul of the person," he says. "I want people to see the beauty of my work."

Dave maintains a collection of his photos on Flickr. He estimates that he has taken a half-million pictures in the last 15 years. He has had seven million visitors on Flickr in the last seven years and has several thousand followers.

About five years ago, the curators of stock photo agency Getty Images, Inc., found Dave's photos on Flickr and approached him to license some of them. Flickr has also contacted him to request photos. "People don't buy pictures of other people's kids, but companies will," he says. The companies use the pictures in advertising.

Licensing a photo requires that he obtain a model release for anyone identifiable in the photo. Standard photography practice, and to make the release valid, is to provide the model with a tangible token in exchange, such as a copy of the photo. Dave has had hundreds of photos published. In 2015 Seventeen magazine ran a photo of his for an article, a photo of his wife and son was featured on NBC Nightly News for the Mother's Day Special, and one of his most popular "bubble" photos was featured on large billboards in the Washington, D. C. Metro for HP.

Dave's website offers his clients a way to review their proofs and select the prints they want. In the meantime, be sure to look for Dave's work in magazines, on the Metro and perhaps even the nightly news.